Eceman is an arcade console game developed during the Algorithm and C Programming course. It was made for Windows and was inspired by Club Penguin Thin Ice.

Check the project on GitHub.

The main goal of this project was to go back to basics in C:

Those were topics I was already familiar with, so I decided to dive into advanced C patterns: building a graphical interface for the terminal and managing entity behaviors. 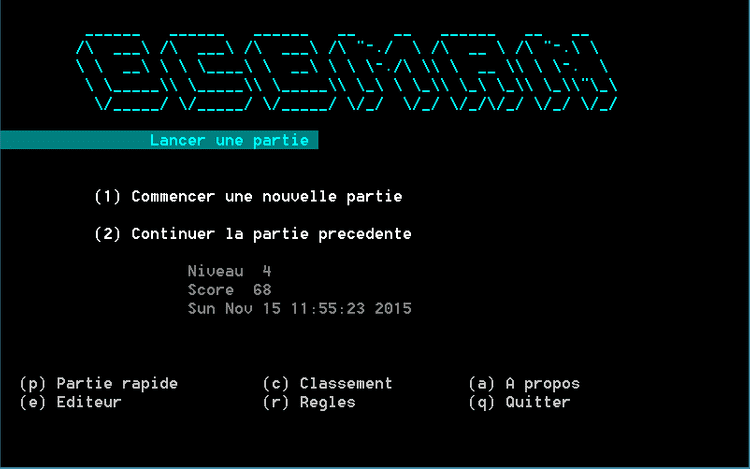 The player must control the main character — Eceman — through a maze covered in ice. Ice squares melt as soon as Eceman walks on them. The more ice cubes it passes on, the better the score gets. Its goal is to get through the door that leads to the next level.

However, the difficulty is increasing progressively: holes make him fall at the previous level, enemies are walking in some, etc.

The board is a two-dimensional matrix (15 * 19) of characters generated by a map file.

Map file for a level 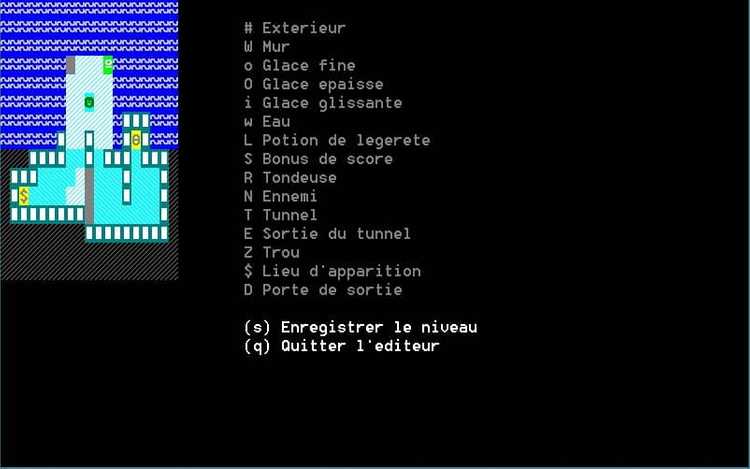 Level associated to this map

The level’s grid uses one character per square. Here are the different types of square:

In addition to these squares exist some interactive entities:

When I first heard that I had to develop a game in C, I was wondering how I could write it somehow maintainable. In my mind, that means I had to replicate the concepts of Object-Oriented Programming.

The tricks I learned reading the Linux code on GitHub were to:

Structures are in a way the ancestors of classes. I then tried to use them a lot to implement polymorphism.

A mower and an enemy are very similar in some way. Their behaviors differ only when they hit an object, and they reach their final state on different events.

I focused a lot on avoiding code redundancy. After a lot of Googling about using Design Patterns in C, I stopped on an article1 by Adam Petersen.

It turned out I had to use function pointers to simulate the Strategy Pattern. I had never used this functionality before, so I got to give it a try!

I first needed to define some function pointers about each strategy.

The Entity should then inherit these functions.

We’re going to specify one of these strategy functions: finalActionStrategy(). It describes the behavior of the entity at the end of a round:

Now, to create a specific entity, we won’t directly call the private createEntity() function but the public createMower() or createEnemy() functions.

This way, we don’t have to worry about the strategies that our entity will trigger, it’s already handled. Instead of having a bunch of switches, I just call my brand new functions that do the job for me:

As you can see, I don’t even need to know what kind of entity it is anymore. We can consider that as polymorphism.

I’m the kind of player that gets quickly bored when the game doesn’t look attractive. It was very challenging to make it sexy, as it is a terminal game.

However, it is possible to add some foreground and background colors. As this game is built for Windows only, I wrote a little function to change the color of the output:

I combined this with another function getCaseColor() that returns the color of the object. It is now easier to print colors: setColor(getCaseColor(ENEMY_CHAR)).

The whole point of the game is to create levels with new entities and objects. I, therefore, made possible to create your own level right in the game.

You can see live changes when you type the character corresponding to the object. A kind of WYSIWYG (What You See Is What You Get)!

This game was programmed in a object-oriented way. Coding is C was not a good fit. It was part of the contract of the course, though.

I feel like I sometimes bent what C had to offer to get more out of it. The way I extended the properties of the entities with function pointers is quite odd in my opinion. Yet, I believe it’s an elegant and appropriate way to handle it.